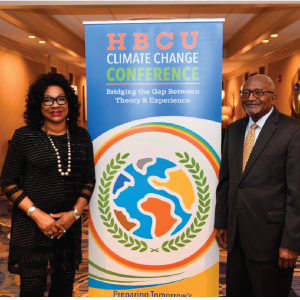 The Consortium was conceived to help raise awareness about the disproportionate impact of climate change on marginalized communities to develop HBCU students leaders, scientists and advocates on issues related to environmental and climate justice policies, community resilience, adaptation and other major climate change topics—especially in vulnerable communities in the southern  United States where the vast majority of HBCUs are located and where more billion-dollar disasters  occur than the rest of the country combined

The HBCU Climate Change Consortium brought a delegation of  51 students and faculty mentors to participate in the United Nations Framework Climate Change Convention (UNFCCC) Conference of the Parties 21st convening (COP21) in Paris, France from November 30, 2015 through December 13, 2015.To date, the Consortium has a total of 30 HBCUs participating in its activities and is growing its numbers to include more schools each year in an effort to train the next generation of climate and environmental justice leaders.  Since 2011, the Consortium has supported hundreds of HBCU faculty, students and leaders from climate-vulnerable communities participate in a number of important domestic and international gatherings including: